1. A resurgence of art

The ideas of the Viennese Secession and the last echoes of Symbolism still permeated the artistic explorations of many leading Italian artists in the 1910s. Those ideas ramified like a nervous system in all aspects of life and the emphasis of the importance of the decorative arts also spread through sets of motifs linked to the Wiener Werkstätte or magazines such as Ver Sacrum. The underlying aesthetic outlook had found particularly fertile terrain in Venice, where the results of the Austrian influences had flourished since 1908 in the exhibitions of young artists held at the Ca' Pesaro. It was a resurgent spring of art in which in different ways many of the ideas of the renewal in painting from beyond the Alps exercised an influence. And in this context women were variously depicted as maidens, unassailable or dormant muses, graceful nymphs or seductresses among granulous clouds of Art Nouveau decorativism, but in any case, as if in a fairy-tale dream.

Ubaldo Oppi (Bologna 1889 - Vicenza 1942). After some adventurous journeys to Vienna, Germany and Russia, he debuted at the Ca’ Pesaro exhibitions: in 1910, 1912 and, with a significant solo show, 1913. In the elegant, cosmopolitan Austrian capital he attended life drawing classes. But it was his contact with the milieu of creative artists such as Gustav Klimt, Koloman Moser and Joseph Hoffmann that had a huge impact on him. The room dedicated to Klimt at the Venice Biennale in 1910 had inspiring consequences on some major Italian artists. The Ca' Pesaro exhibitions thus became a breeding ground of a new generation of artists: there was a communion of the souls, involving artists such as Felice Casorati, Vittorio Zecchin, Arturo Martini, Gino Rossi and Guido Cadorin; some of their works will be shown and compared in this section. 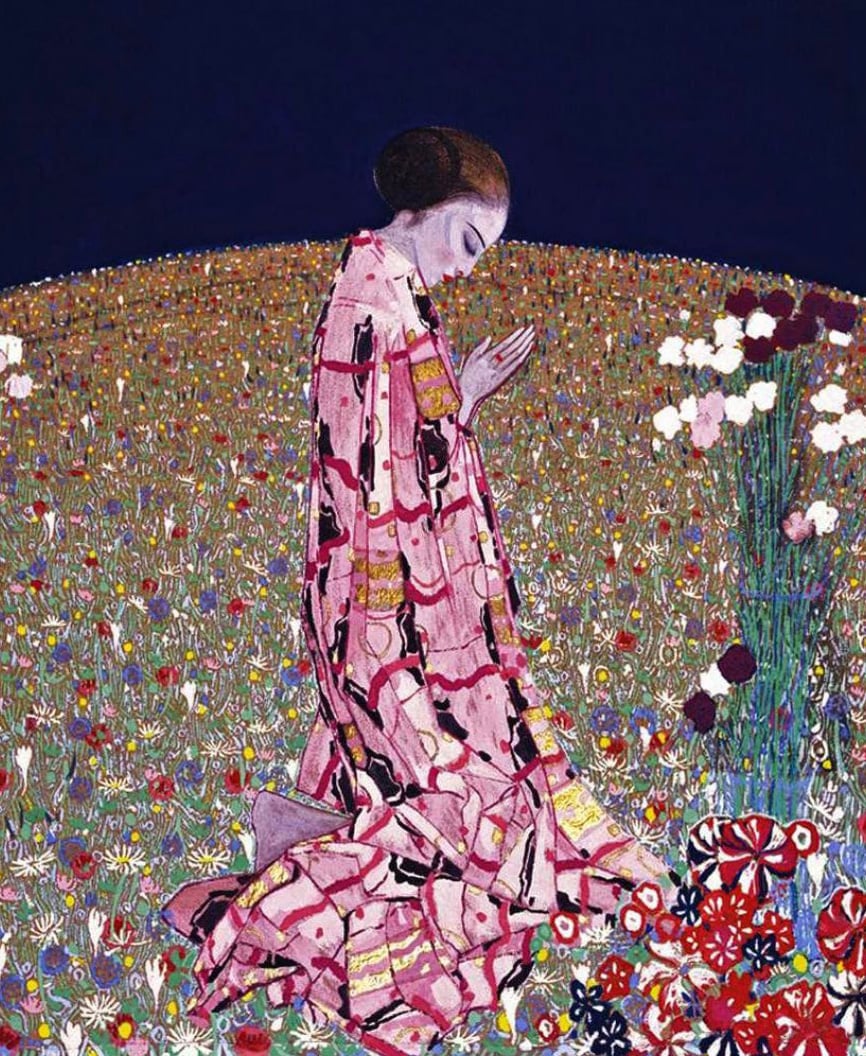 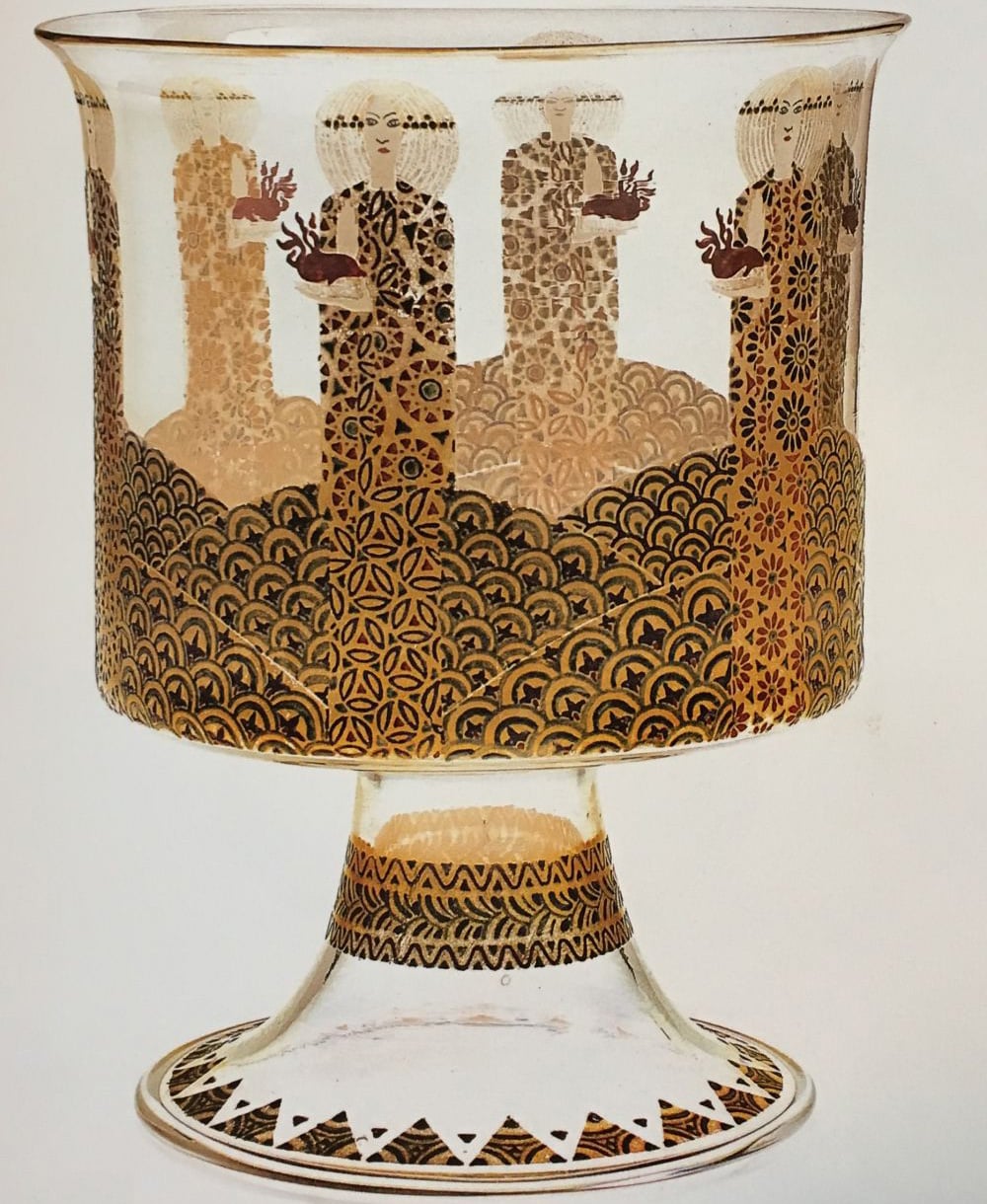 Paris, the Ville Lumière in the Belle Époque, was rife with fun, pleasure-seeking and dissolution. But it was also an avant-garde cultural hothouse abounding in intelligence and despair.

The prevalent image of young women in art and literature was the temptress, who degenerated into a femme fatale or ‘lost woman’. They are portrayed as they glide through modern life. We see them caught unawares, stylishly dressed in cafés, quietly flaunting their youthful good looks, but also as elusive and bewildered as flitting nocturnal moths.

The expressionism of the fauves and the art of Picasso became contagious in Italy, too, and was experienced directly by some fortunate artists who actually did go to France. Among them was Oppi, who made a trip to Paris in 1911, where he met a down-and-out Modigliani and flirted with Fernande Olivier, who had fled from Picasso. He was captivated by the intense colours and brush strokes of van Dongen and Picasso, and Matisse’s sinuous marks. The urgent need to get up to date drove him to seek highly acclaimed model artists and borrow from them, but in a highly personal way.
The results of the Parisian influences could be seen in the Ca’ Pesaro exhibitions: Oppi’s colleagues like Gino Rossi and Arturo Martini were both influenced by Expressionism, while others, like Ugo Valeri and Mario Cavaglieri, still looked to the Impressionists and Post-Impressionists. 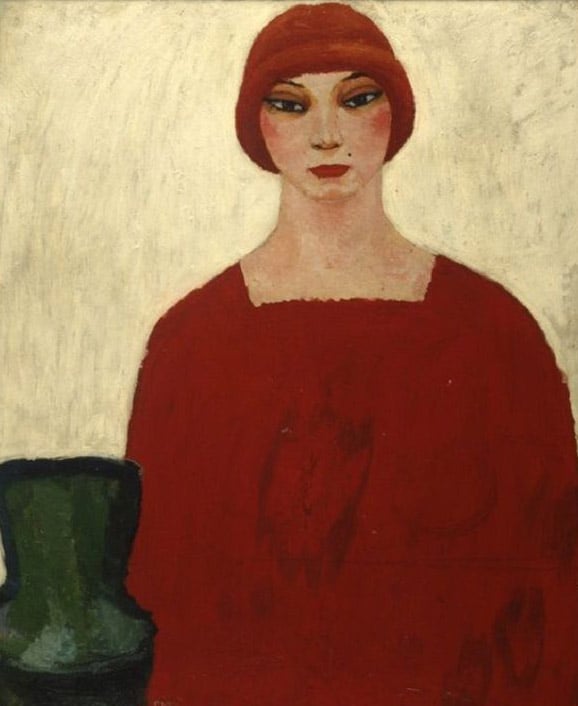 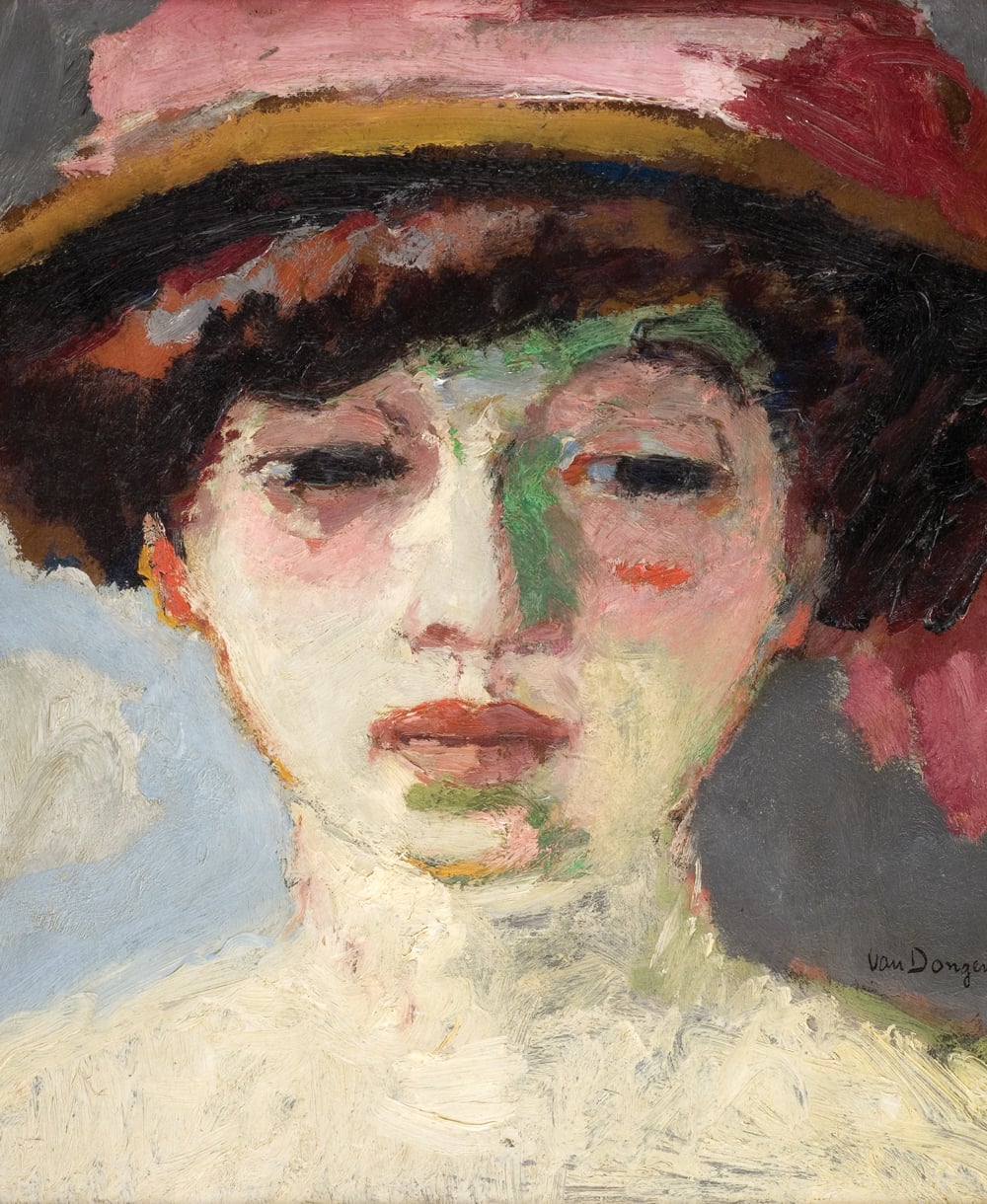 From 1911 to 1913, Ubaldo Oppi lived in Paris, in the artists' quarter of Montmartre, near the Bateau-Lavoire building where Picasso had a studio. The silent, self-centered figures of his single women at the café echo his blue period, as well as André Derain's. The theme of "double" and "friends" is born from here. In 1915, he returned to Italy and joined the Alpini Army.

War was men’s business, a world of battle, despair and mourning. But the conflict also brought domestic destruction and loss: women and children fleeing their homes are the painful subject of many paintings at this time, as is the world of family affections while wives, sisters and mothers await the soldiers’ return. Some never came back home, like Margherita Sarfatti’s son, Roberto. Having enlisted as an Alpine volunteer, he was killed in the mountains near Vicenza. This may have led to the meeting between Margherita Sarfatti and Ubaldo Oppi, on leave in Milan, and the beginning of their deep mutual artistic understanding.

This section of the exhibition tells the story of the monument dedicated to Roberto Sarfatti on Col d'Echele and a comparison is made between works of art addressing the themes of the feelings of that time. The Alpine soldier Oppi was wounded and then deported to Mauthausen prison camp.

Later, he was to recollect those events, in works such as The Surgeons. The title refers not only to the doctors who operate on wounds with such precision, but is also the transfigured symbol of knowing how to paint acutely perceived reality, along the lines of the German Neue Sachlichkeit (New Objectivity). 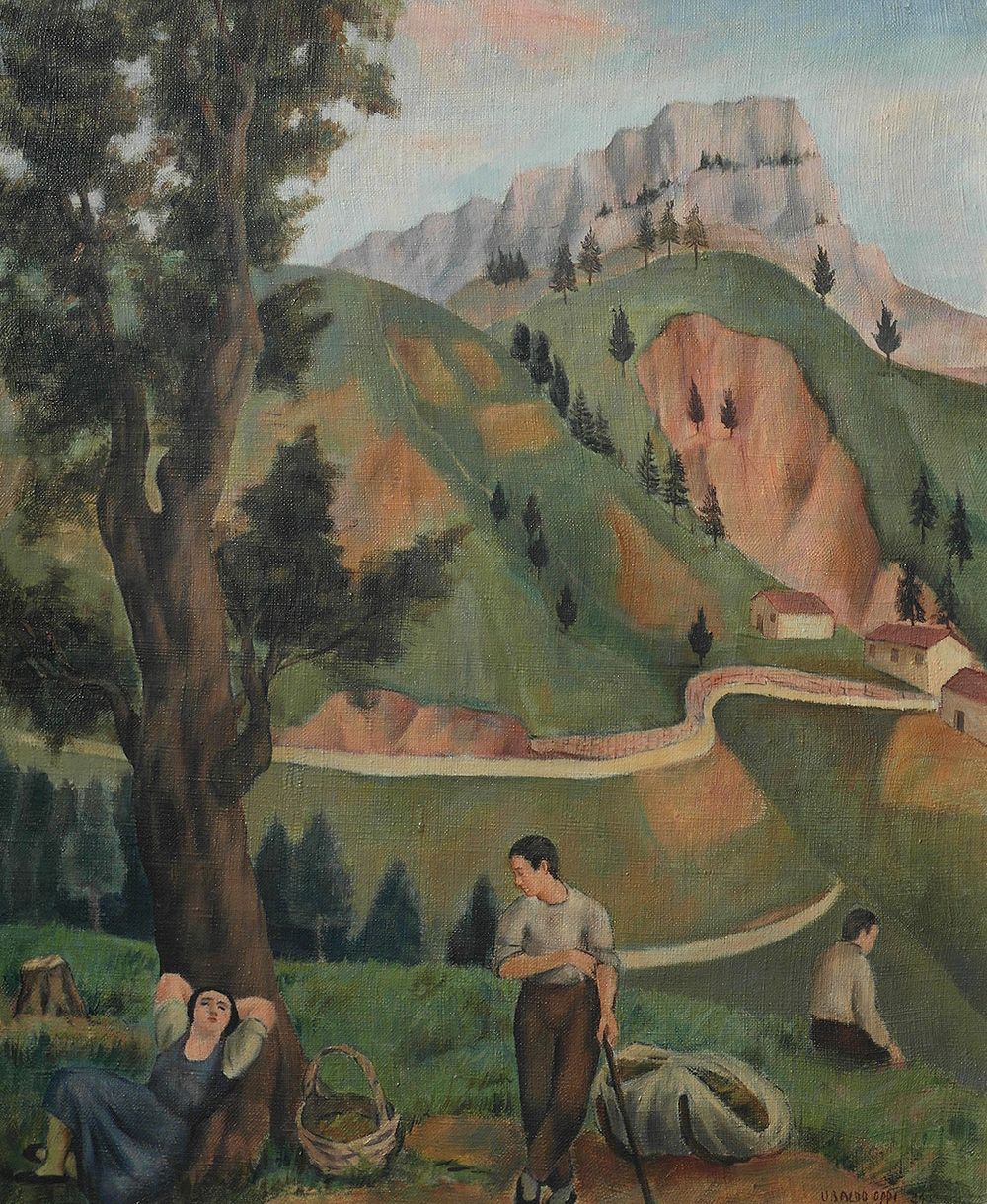 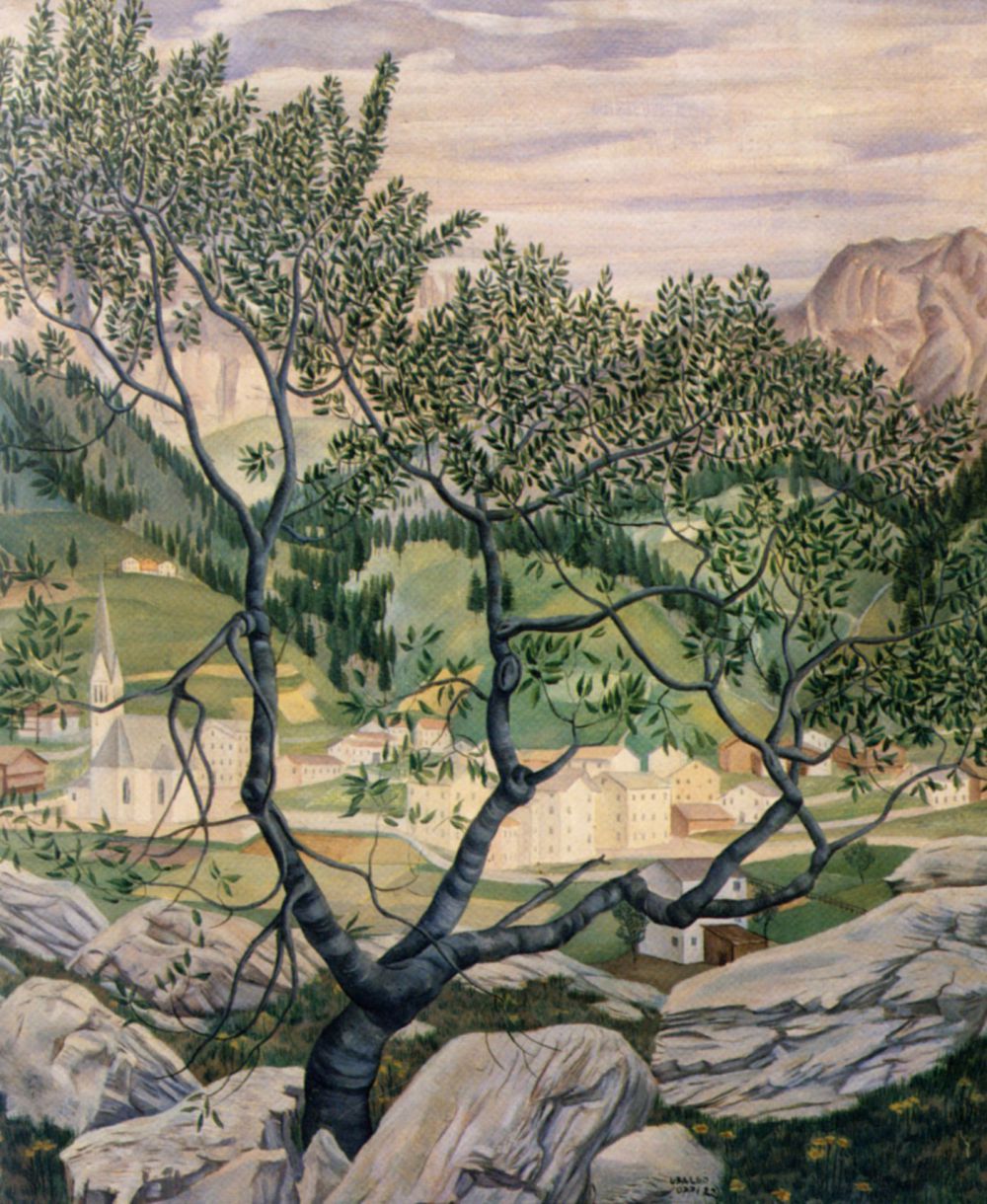 Released from captivity, he returned to Paris, immersing himself in the bohemian environment; after having enjoyed success at the Salon des Independants at the end of 1921, he returned to Italy and settled in Milan, but kept in contact with the French capital, exhibiting in 1922 at the Salon d’Automne.

The 1920s witnessed a regeneration also in painting: Valori Plastici, Novecento Italiano, Realismo Magico and Nuova Oggettività were among the ground-breaking movements and groups, partly inspired by Classicism and the specifically Italian features of the Renaissance.

Ugo Ojetti and Margherita Sarfatti were the powerful leading players on the stage of the Italian art system. The contrast between men and women could also be felt in their different outlooks and roles. In 1922 Sarfatti already supported the group of the Sette pittori di Novecento. The ‘Seven Twentieth-Century Painters’ were Oppi, along with Anselmo Bucci, Leonardo Dudreville, Achille Funi, Gian Emilio Malerba, Piero Marussig and Mario Sironi. The different ideals of these painters are compared in the exhibition. Sarfatti had chosen them so that they would show "the best expressions of pure Italian art".

But when Ojetti offered Oppi the possibility of a solo show at the 14th Biennale in 1924, the harmony of the group of seven was disrupted. Oppi presented mesmerising paintings that departed greatly from the other works on show. La giovane sposa (The Young Bride), Le amiche (Women Friends), and a sketch for the Amazzoni (Amazons) show powerfully built, proud women in images polished to achieve a spellbinding, iconic dazzling fixedness – exotic yet realistic. Greatly acclaimed by the press at the time, these works have a striking common motif of twofold presences, such as the friends/sisters or sculptures as the principal subject’s double. Even in the images that closely court Classicism, there is nevertheless the suggestion of the idea of a new woman, able to usurp the imagination by her presence alone. As for the writer and art critic, Massimo Bontempelli, here the concept of ‘disquiet’ was closely connected to that of 'beauty', while the other artists’ women, from Mario Sironi to Felice Casorati were different, metaphysical, and in any case more in tune with the dictates of a historical and political climate tending to bring the role of women back to the sphere of domesticity. 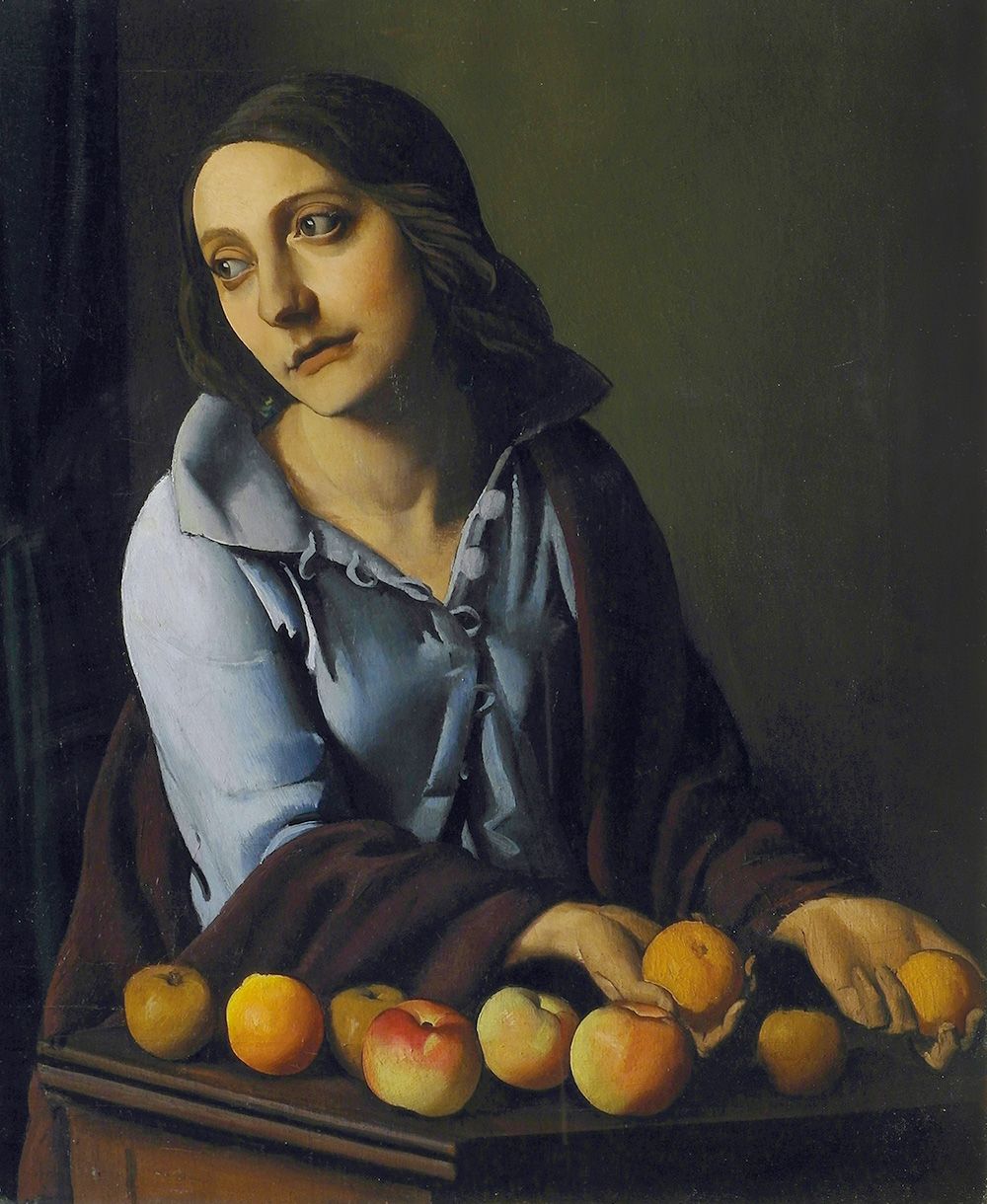 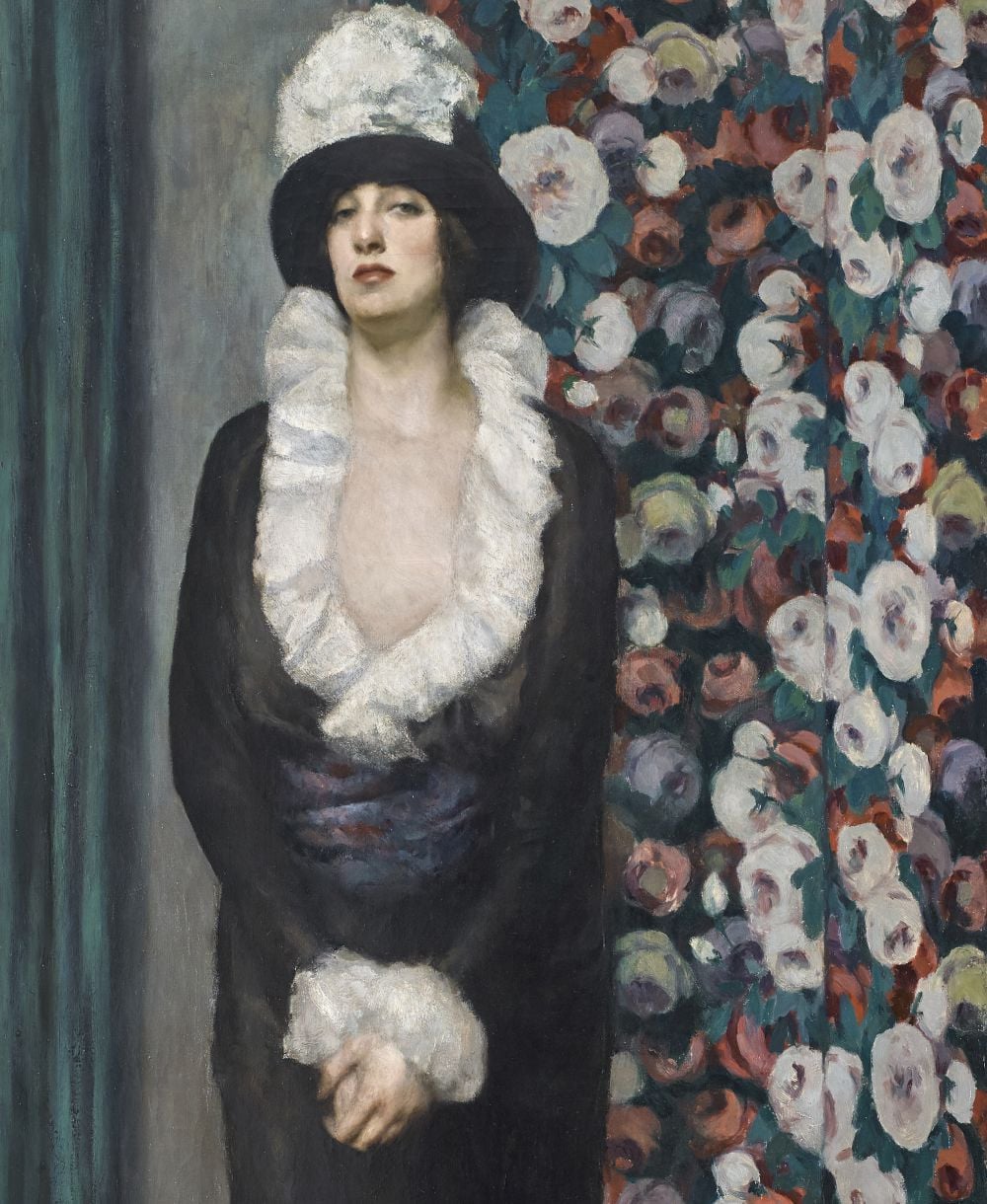 5. The new twenties woman grows in the imagination

In the 1920s, film and fashion divas like Josephine Baker, Amelia Louise Brooks, Greta Garbo or Coco Chanel launched the image of a diverse or new woman: her silhouette was different, and so too were here modern ambitions. In 1928 Amelia Earhart was the first woman to fly solo across the Atlantic.

Yet while cabarets and cafés provided the thrills of transgressive freedom, there were also changes in everyday life. Doing the jobs of soldiers away at the front and having new responsibilities made women aware they could play a different role, even in an Italy lagging behind in terms of modernity, although it was now developing new technologies and making a certain ‘roaring’ progress.

This situation was splendidly summed up in the play Nostra Dea (Our Goddess, 1925), written by Bontempelli with encouragement from Luigi Pirandello. The heroine Dea, a modern young woman, changes her personality with her dress: from sweet and playful to 'snake-like'. The ‘close-ups of absent-minded women in cafés’ that Bontempelli highlighted in those years are like today's young women absorbed by their mobiles. 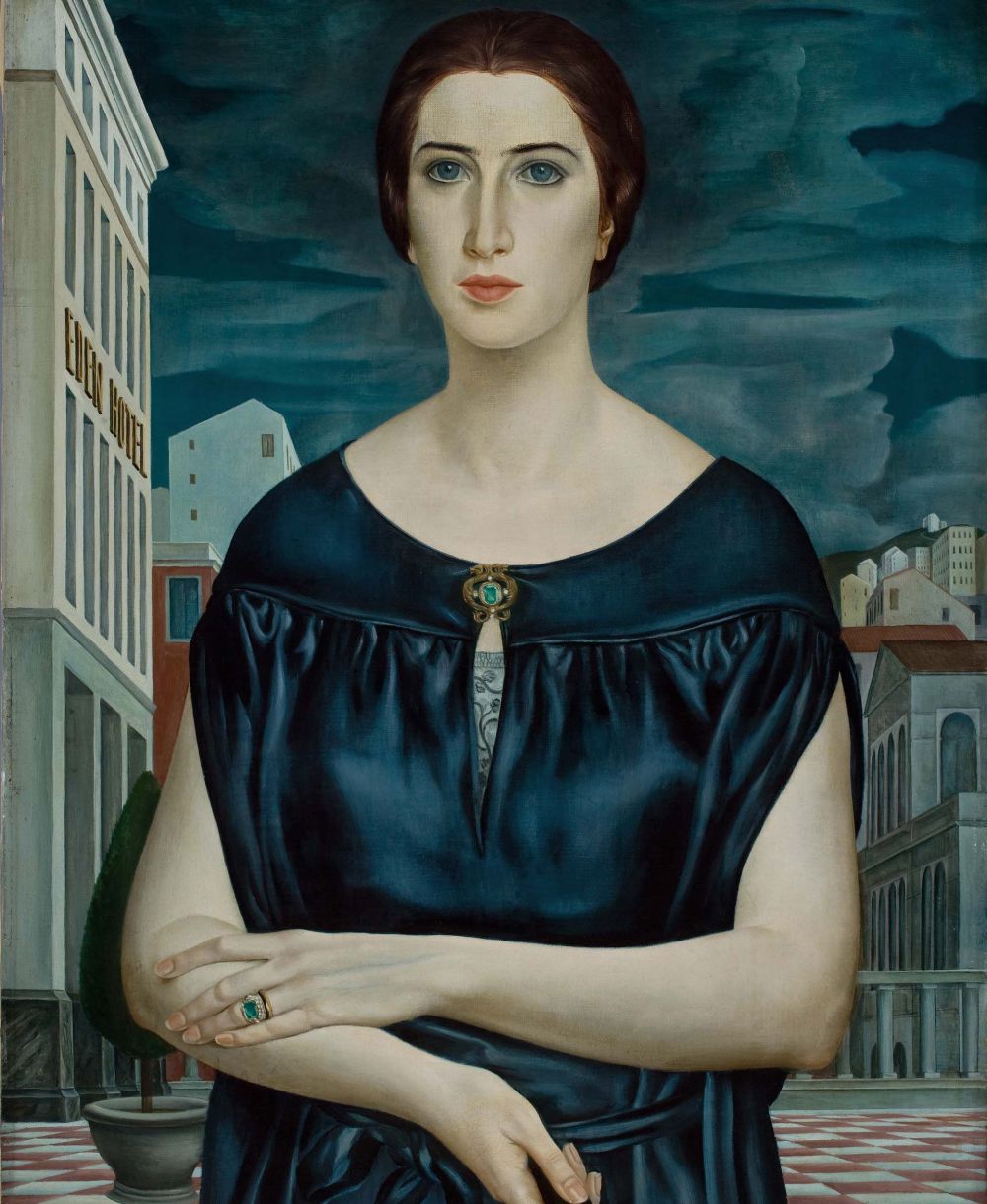 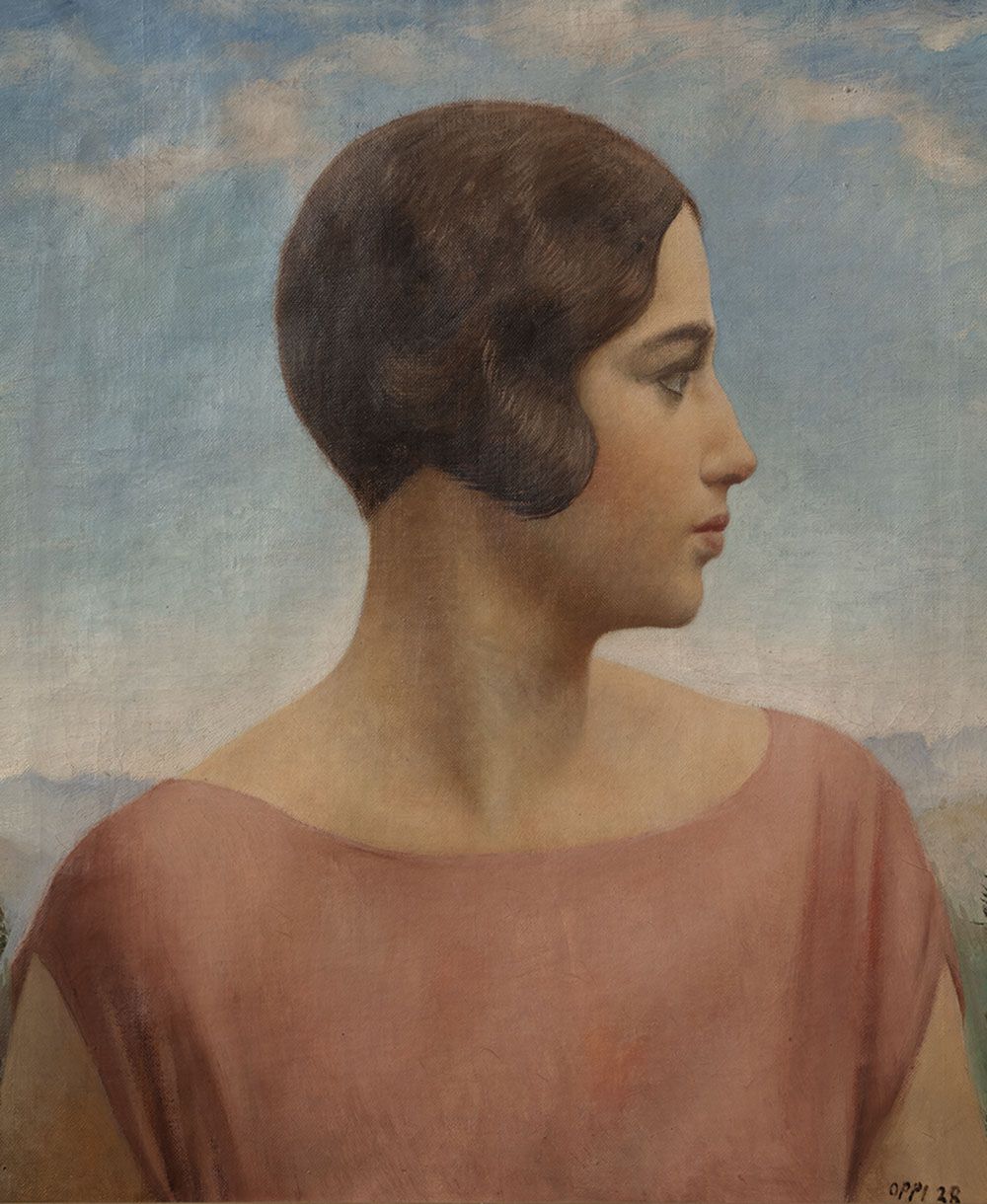 A moment of reflection on the historical moment and on the people of that time, on the social role of work and also a comparison with the male counterpart. 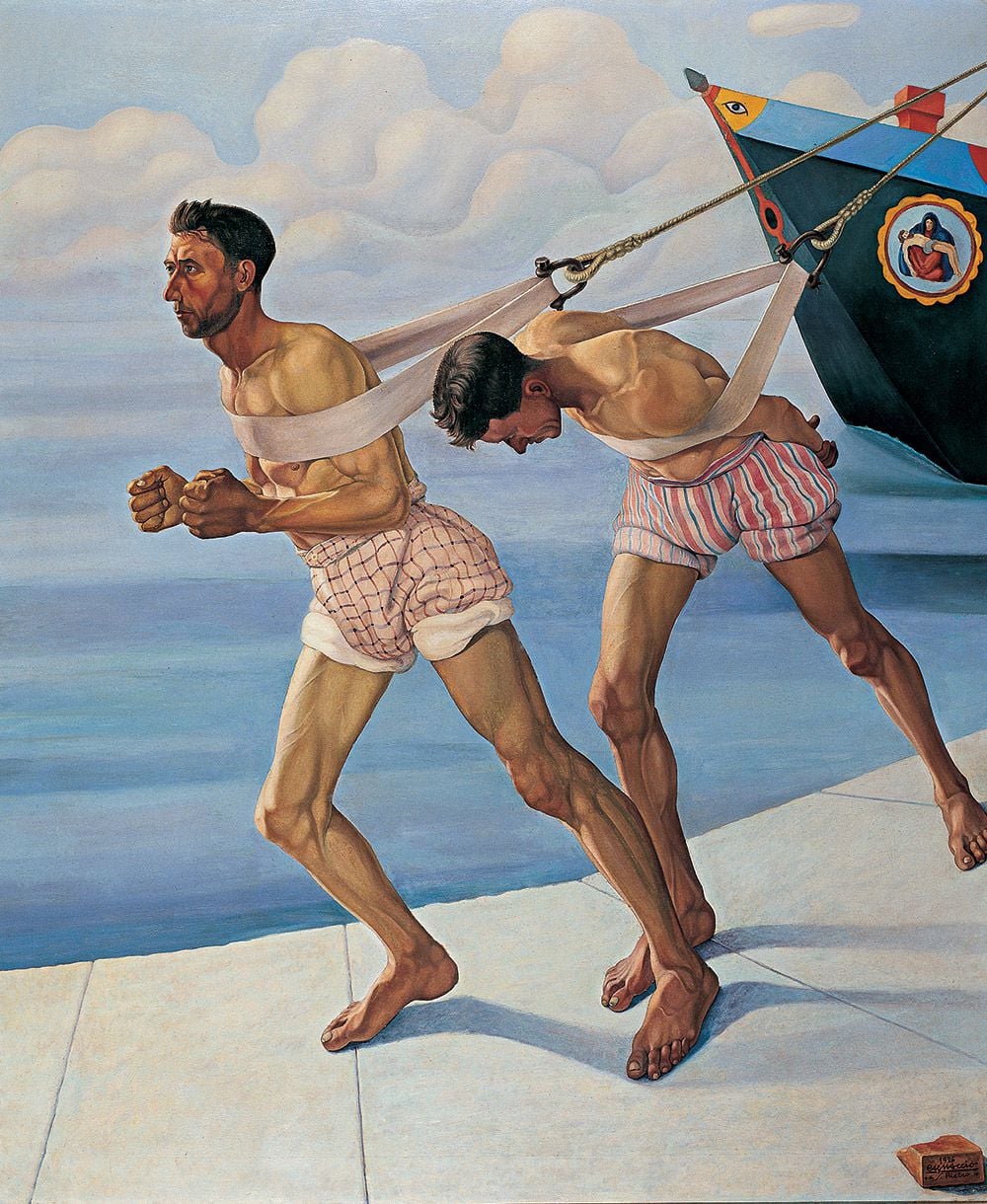 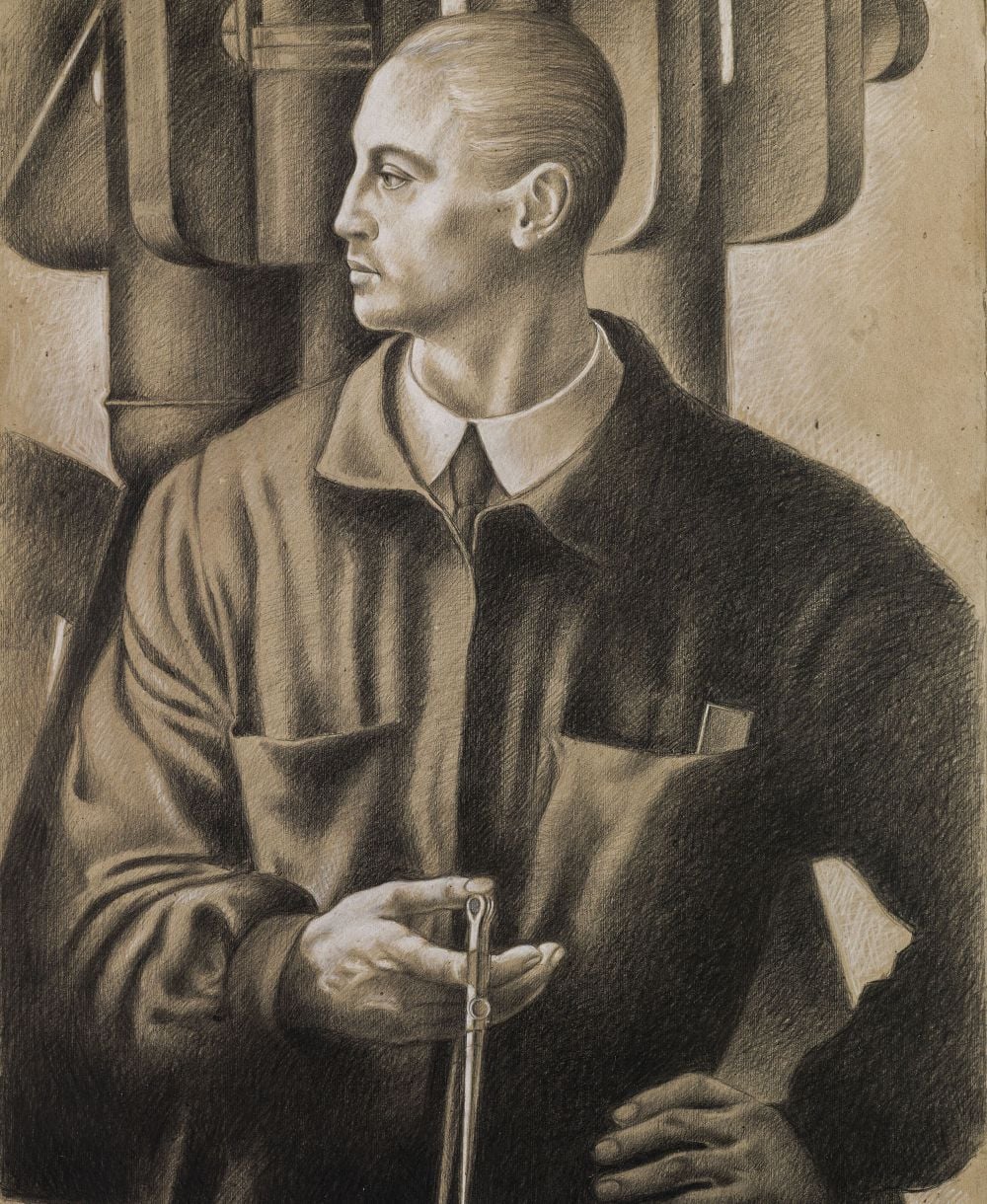 Scandals and Successes. The 'new' women were daring and at times could be scandalous. But they were also constantly confined in traditional, subordinate roles, like the painter’s model who becomes merely an object to be contemplated or desired.

A significant development foreshadowing what was to become the 'new Italian art' was the Mostra del Novecento italiano (Exhibition of Twentieth-Century Italian Art), held at the Palazzo della Permanente, Milan in 1926, and officially opened by Margherita Sarfatti with Benito Mussolini in attendance. All the artists deemed to be the most significant names in contemporary painting were invited. Oppi, however, was the victim of a vendetta. He was accused by an association of local painters of showing works, including Sera romagnola (Romagna Evening) and Nudo provincial (Provincial Nude), that were copies of photographs of French nudes. This was considered somewhat scandalous in itself but, more importantly, implied a lack of skill as a painter, since the artist had taken a shortcut rather than work with a model. Oppi was forced to justify himself publicly and explain how those pictures were openly sold in Parisian antiquarian bookshops and on stalls in the boulevards. His full-bodied, immanent  womenpresences reflect the poses and attitudes of 'Classical nudes'. But also brazen and imperturbable, they knowingly reveal a kind of secret power to the observer’s gaze.

This section features works from the 1920s, when Oppi continued, despite the smear, to enjoy success in three editions of the Venice Biennale (1928, 1930 and 1932) as well as in other major
exhibitions, such as the Secession exhibition at the Glaspalast, Munich (1928), and a solo show at the Galleria del Milione, Milan (1930).

Farewells. The theme tunes to the 1930s were the light-hearted melodies sung by the Trio Lescano, such as Signorina grandi firme (Designer-Label Young Lady – also a series of fashion magazine covers) and Gelosia non è più di moda (Jealousy is Out of Fashion). But it was also a time when the Fascist regime exercised a growing, stifling influence on all aspects of culture.

In 1932, Oppi was back living in Vicenza. Difficulties in adapting to the changed art system and a personal crisis led him to seek public commissions, both for sacred art and public works, such as the decoration of the atrium of the Palazzo Liviano (University of Padua, 1938-1940, never realised). This last section reconstructs that great decorative adventure through comparisons with artists such as Sironi or Gio Ponti.
Oppi sought to give his works a greater monumental strength, while the painterly aspects were inspired by the pre- and early Renaissance Italian ‘Primitives’. His most convincing and successful works, however, again featured women, such as the Adamo e Eva (Adam and Eve) in the Palazzo Chiericati Museum. 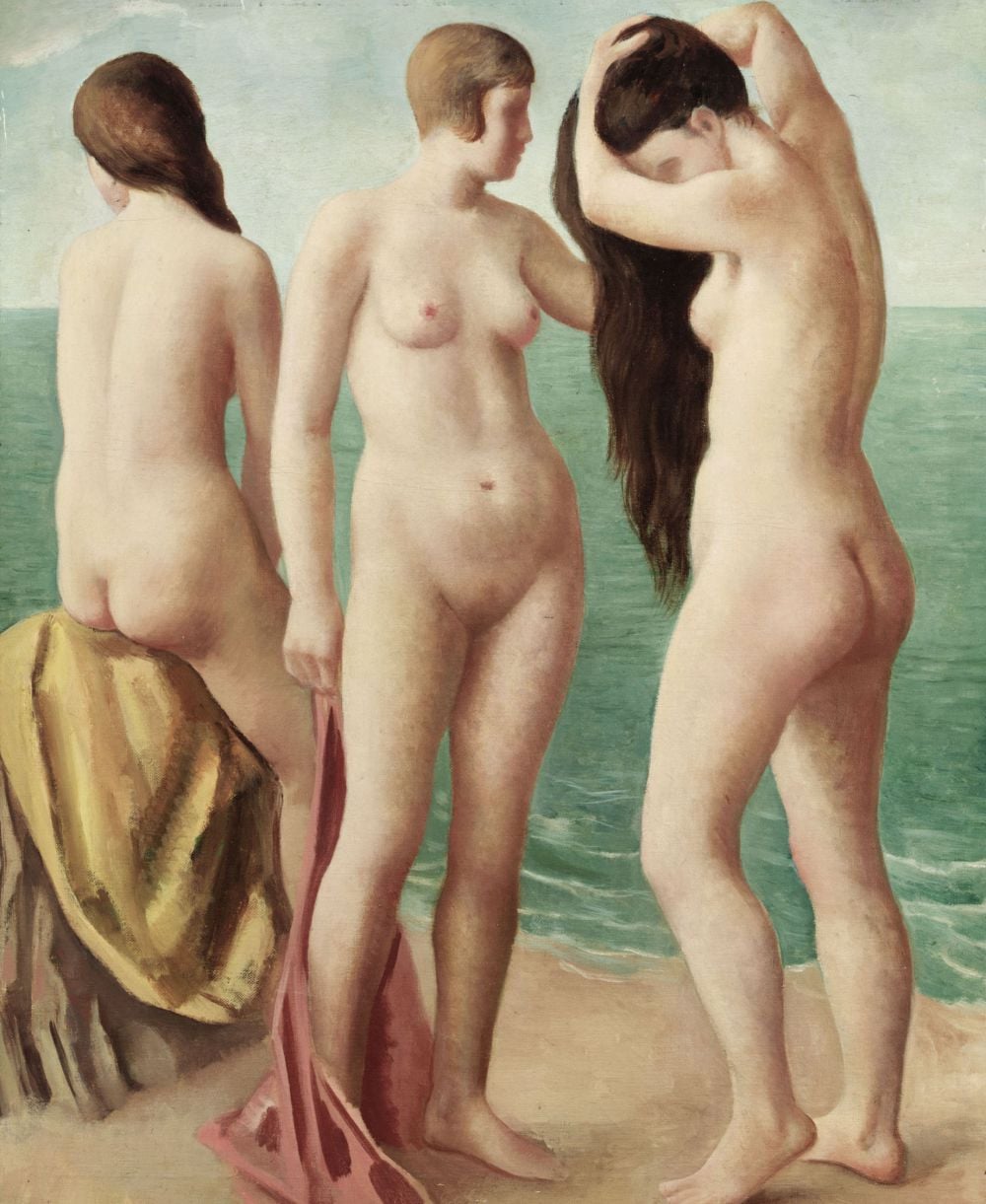 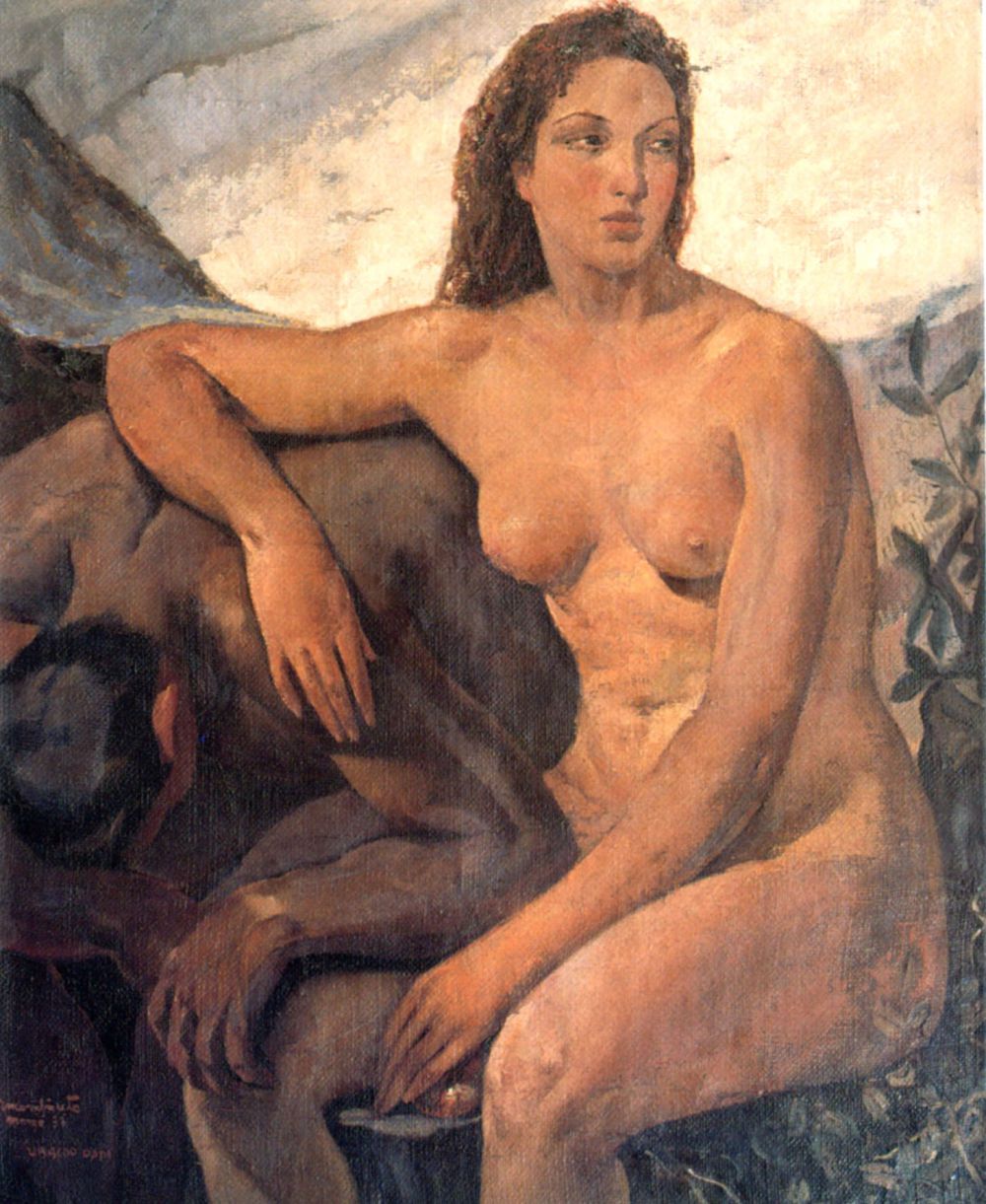